LAHC sadly bids farewells to its Treasurer and Head of The British School, Rio 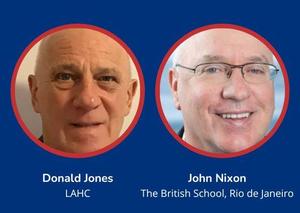 As we move into 2022, we announce some changes to our executive team and within the LAHC network.
Donald Jones MBE, LAHC’s long standing ex-oficio Treasurer, and John Nixon MBE, Head of The British School, Rio, have both retired from their positions. They have been an integral part of the development and growth of LAHC, both within their schools and in the wider community. We give them our heartfelt thanks and wish them a happy retirement!
Donald Jones
Donald Jones founded Cambridge College international school in Lima in 1984, and guided the school to become a highly successful and flourishing school in the more than 30 years that he was its Head. He was a founding member of LAHC, serving several terms on the Executive Committee, and subsequently gave many years of dedicated and exemplary service as the permanent ex-oficio Treasurer, for which he has always refused to accept any remuneration. In 2019 was made an MBE for services to education in Peru and Latin America. Our heartfelt thanks go to Don, without whose tireless commitment and meticulous attention to detail LAHC would not have been able to operate smoothly and efficiently. His contribution has been enormous and we shall miss him dearly.
John Nixon
John Nixon, who received an MBE in 2007 for his services in education in Taiwan, retires from the headship of The British School, Rio de Janeiro after 10 years of outstanding service. John has brought his tremendous wealth of experience and depth of educational knowledge to bear in taking TBS through an impressive period of growth and development. His professionalism, dedication, concern for others, generosity of spirit and dry sense of humour, among many other qualities, have been invaluable not only to the TBS community but also to LAHC, where he has made numerous contributions over the years. His departure represents a gigantic loss for the school and for LAHC. On behalf of LAHC, we wish John the very best in his retirement.